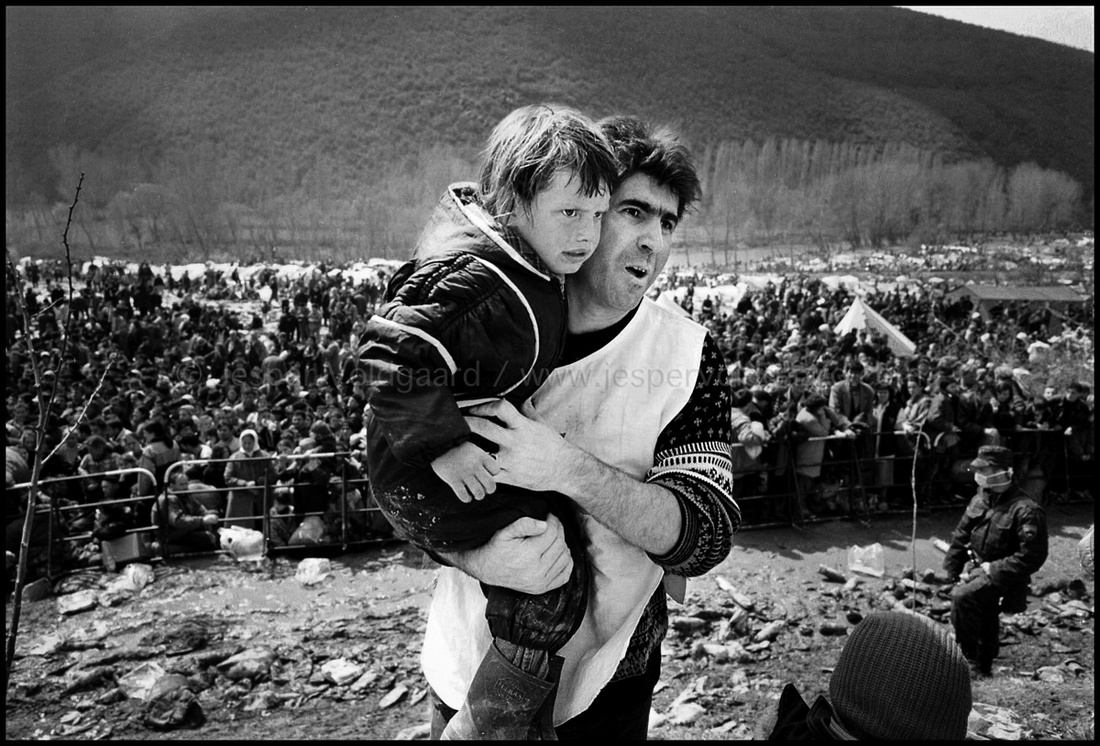 Macedonia 1999Border crossing at Blace. A Red Cross volunteer has been allowed to take a boy to medical treatment inside Macedonia. His parents are still caught in no mans land between Kosovo and Macedonia. ©1999 Jesper Voldgaard/JP

These days pictures of refugees trying to cross the border into Macedonia from south fill the TV-screens, newspapers and facebook feeds. Even though the stream of refugees have been going on for several years into places like Lampedusa, Turkey and other places, it seems that it is not until refugees reach mainland Europe that we really care - or don't care. Again!

Sixteen years ago I witnessed another refugee situation in Macedonia, which was very different, but in several ways exactly the same.

Macedonia was at that time also the center of attention after thousands of refugees tried to enter the country, at that time from Kosovo in the north, and the scenes playing out were exactly the same as today. Refugees caught in no mans land, while heavily armed Macedonian police made sure that no one or very few could enter the poor and small country left with massive problems on its door step.  Wearing their surgical masks made the police force look even more hostile towards the refugees, who had literally been fleeing for their lives. The mass graves uncovered 3-4 months later proved them right.

Photographing under such circumstances is tough - physically but even more so emotionally. Others are much more experienced in these kind of stories than me, but still it makes sense to be there, because you believe you can make a difference, bringing attention to the human suffering.

Then came a call from my editor at the newspaper I worked for at the time. We needed to go to Skopje at once, where a Danish minister would land shortly to begin negotiations about how many refugees Denmark would be able to receive.

I was furious. Imagine leaving this scene - no matter how depressing and sad it was - to go wait for a politician to get a statement. I remember we finally caught up with him in a luxury hotel outside of Skopje and managed to get photos of him inside an elevator made of glass and polished steel.

In hindsight though there was a positive lesson to be learned. The picture of a politician in an elevator was rubbish, but at least it was a sign, that maybe the europeans had had enough of the human suffering on their door step and maybe the politicians were able and willing to act without the fear of loosing their seats. I remember the number of people the Danish minister announced that he could invite to Denmark at first felt embarrassingly low, but at least the politicians of that time were able to unite to get refugees away from the make shift camps in no mans land and into better conditions in relatively well equipped camps in Macedonia and Albania and move a large portion to other European countries.

Of course the situation today is different, but no one talked about using battle ships and armed forces to keep refugees away.

Is it fair to leave it to Macedonia, Greece, Italy etc. - is there a political will today? 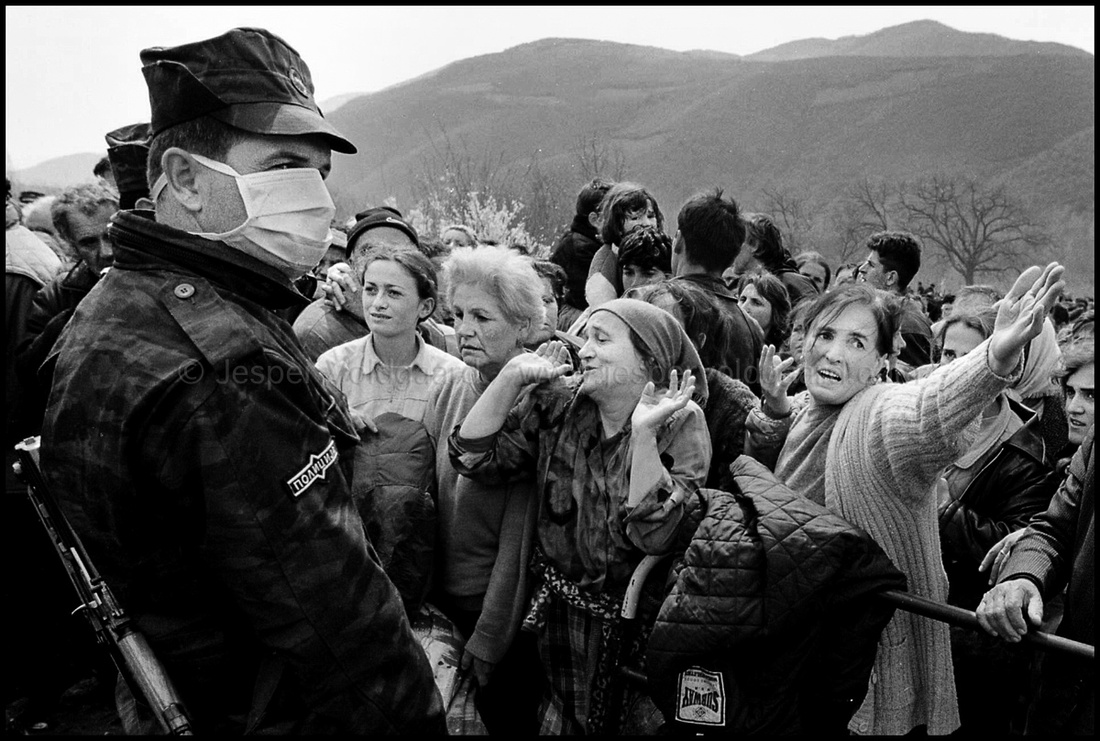 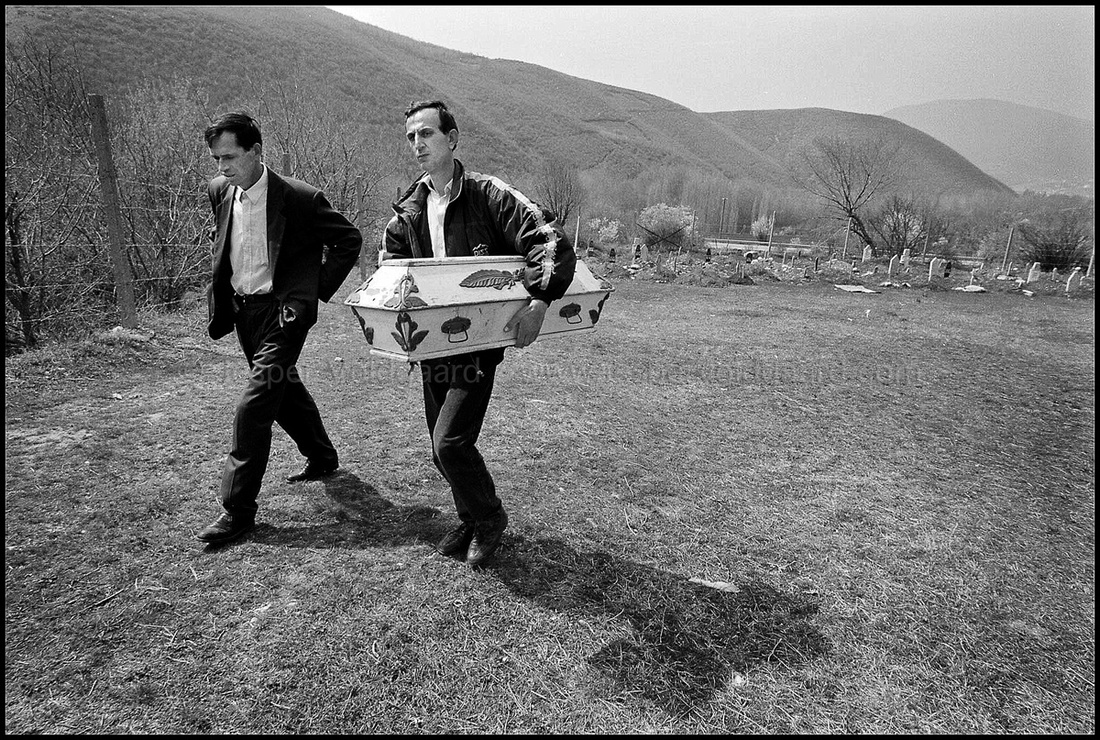 Macedonia 1999After the burial of one month old refugee child Qendrim Mexhuani, two volunteers bring the coffin back to the camp to be reused. Macedonia 1999 © 1999 Jesper Voldgaard/JP